Hello everyone! It has been months since I last updated you with the changes that has been happening to my hair. I actually had a couple of treatments done since my last post which was August of last year. Read further to know what services I availed and where I had them done.

After compiling all the photos with my new look, I was surprised to see obvious changes. Normally, even if I do noticeable changes to my hair, I would still normally feel like nothing happened to the point that I want to go to a salon again. Yes, I think going to the salons is something enjoyable and very therapeutic. It is my own little way of unwinding.

My last update was about having my hair back to being dark. And that happened August of last year. Though it faded, I still find darker hair at that time quite boring so I explored my options.

I searched for the hair color that I want to achieve that time and I ended up wanting highlights for my hair. I went o Azta Urban Salon in Robinsons Metro East and for Php900 pesos, my hair went from black to having streaks of blonde hair. I loved it! I enjoyed being demi-blonde. If there is such a thing, haha! Sorry for the blurred photo.

January came, I wanted to do something to my hair again but I am not ready do go drastic so I just went to a salon near my place and had my highlights retouched. This time, I wanted them to be more visible. I wanted wider streaks and more bleached. For the base, I asked them to use Matrix's Wonderlight in Red Mocha and for the highlights, they first used Wonderlight in Gold but it didn't show up so I asked them to use a bleaching power instead. It is more harsh but I wanted really visible highlights so I took the risk. Yes, my hair became damaged because of the bleach.

I forgot which month but I had my hair trimmed. I wanted to get rid of the layers. I had just the normal straight cut for my hair. This one, I regret. You'll find out later why. A week after cutting my hair, I had it colored with a really dark brown hair dye from Garnier. It appeared black. My boyfriend liked it but I have a love and hate feeling about it.

Last change took place last month, March. After seeing a digital perm promo at Ensogo, I immediately purchased one for me and one for my sister. It cost me Php 1499 per voucher and I can have it done at Azure Salon along Katipunan Avenue. Watch the video below to see a glimpse of the procedure.

So that's what happened to my hair for the past months. I stopped having anything done to my hair at this moment. I think my hair needs some resting. But, eventually, I'll explore more on the new trends about hair. I hope you'll still join me in the future. 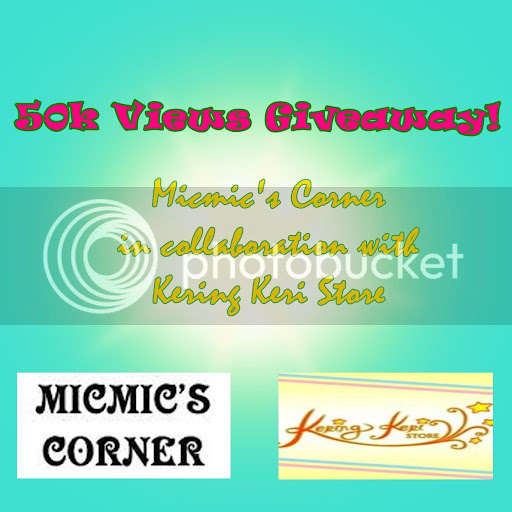 My blog finally reached the 50,000 views and I am not here to brag. I am just so thankful that in my busy schedule, God is still there to help me find time for my blog. I am also thankful for having few but very valuable readers. Without you, this blog will definitely be useless. Not only that, my blog already has 300+ followers and my Facebook page reached 300+ likes. Overflowing blessings I can't contain.    Indeed, blogging is really a fun thing to do. I get to explore on things that I really love and share my thoughts here. But you see, blogging can be a pain too. Haters are everywhere. They will criticize your grammar, your face, your clothes and even judge you as if they know you personally. But, that can't stop me from blogging. I may be wrong with my grammar na parang barok. I don't hate my face but I know I am not as pretty as the other bloggers are and I may lack fashion sense but, I will continue on doing this. Especially now that my blog is slowly growing. Eno 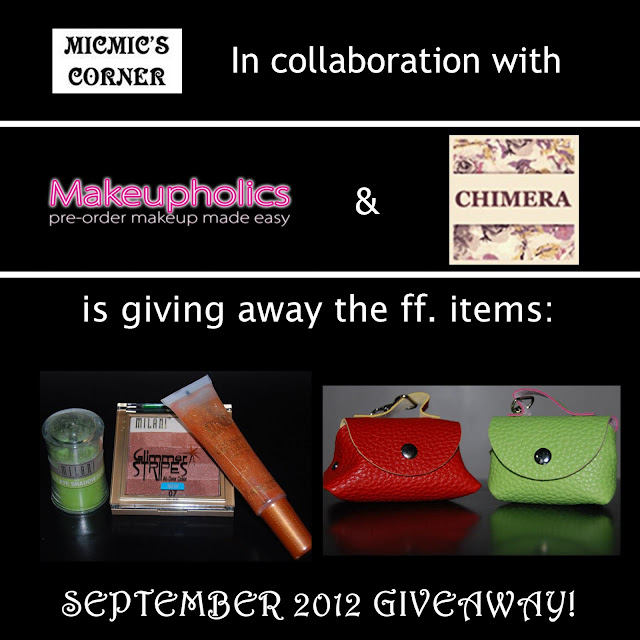 Start of “Ber” months na! Yehey! I smell Christmas again. Oh, how time flies so quickly. Are you starting to write down your Christmas wish list? I should start mine, too. Anyways, I want to welcome Christmas season with a giveaway for my Philippine based followers/readers. So here are the items at stake. I will be giving away Milani makeups sponsored by Makeupholics . I tell you, these makeups looks really tempting in actual. The winner will also get 2 cute tote bag coin purses sponsored by Chimera On Line Shop . Thank you lovely sponsors!

Have you tried a product and it became your favorite you thought you'd never want anything better anymore? I experienced that. Last year, I reviewed this product called Strip It Hair Removal Sugaring  and it instantly became my favorite. I have tried other brands but nothing beats my first love, not until I have tried it's sister, Chocolate Sugaring . Ms. Arlette,  the owner of Strip It , contacted me and she told me that she's willing to send me samples of their Chocolate Sugaring for me to try out. I fell in love with their first sugaring kit, so who am I to say no? [caption id="" align="aligncenter" width="612"] Here's my Instagram photo when I received the products.[/caption]